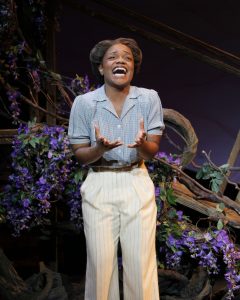 Let me preface this blog post by saying that I love the movie, The Color Purple. It was the first PG-13 movie that I saw (I was about 9 or 10 when it came out though but we still got to see it alone anyway) and later read the book. I was moved by the story of Celie, the heroine of the film which triumphs despite years sexual and physical abuse and being torn from the only person who loved her, her sister Nettie.

When I found out that The Color Purple the musical was coming to the Fabulous Fox Theater here in St. Louis, I knew I had to see it. The first two times it visited here, I was unable to attend. Thanks to the Fox’s wonderful staff, I was gifted two passes to see the show for a review!

Placed near the front of the theater, we had fabulous seats!

The musical started with a with a Young Celie and Nettie playing their handclap game as the church ladies announced it was Sunday, time to hear the Word. Let me tell you, the entire church ensemble got us rocking in our seats, and it felt like we were really in church. They were stepping and moving and feeling it. It gave me goosebumps. The singers were unbelievable.

We then move forward to a fourteen year old Celie who is pregnant with who she think is her father’s child. This begins Celie’s heartbreak as the baby, the second one she birthed, was ripped away from her and taken away. And just like in the movie and book, Celie is “sold” to a man named Mister for a “cow” as dowery and so begins her life in hell. Celie must tend t cooking and cleaning and taking care of Mister’s five children. She also must submit to him in every way, and while the play is not as brutal by showing the deeds Celie must perform, the writers get it right by being able to display with song the sadness Celie must live with. 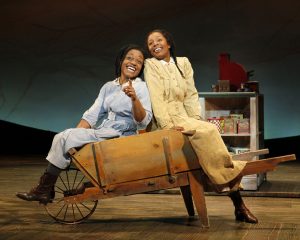 Then suddenly. Celie’s sister is forced to leave after moving in with Celie and Mister and his children for not letting Mister have his way with her.

The scene is truly heartbreaking. The music. The screams. The pain. Everything was felt in that theater.

Comic relief comes in the form of Sofia played awesomely well by Felicia P. Fields. I never pictured anyone other than Oprah Winfrey, one of the play’s financiers to get Sofia right, but Ms. Fields nailed it. She was funny when she needed to be and painful when it was called for. Her voice beckoned like a lion when she sang.

Shug Avery, singer, dancer, and woman of the world, comes into the picture as well around this time, torn and confused. Raw. Celie and Shug strike up a special friendship, which doesn’t go unnoticed by Mister who is in love with her, and the townspeople, who gossip about the goings on at Mister’s house. 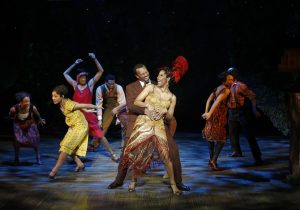 The play takes the same course as the movie, but the original music scores and numbers make it a visually stunning epic musical. Kenita R. Miller, who plays Celie, brought tears to my eyes with her voice. She is tiny in stature, but her vocals are massive, brilliant, and soulful. The stage was hers and she commanded it like the professional she is.

Angela Robinson who plays Shug Avery is a ray of light on the stage. You can’t take your eyes off of her. Simply one of the best musicals I have ever seen!

Latoya London, American Idol alum, skillfully plays Nettie, and surprised me with her voice. It seemed more seasoned, more developed than when it did six years ago on Idol.

Rufus Bonds, Jr. took on the role of Mister and was even able to make him somewhat likable at the end. Stu James who played Harpo was a scene stealer, changing from a man child, into a son who made his father proud.

And the choreography! Let me tell you that there was not one person who wasn’t dancing in their seats, replicating the grooving they saw taking place in front of them. I was too! The dancing, strategically yet artfully placed in various numbers, was a highlight, especially the scenes about Africa.

The orchestra and the performers were one in time, and the production was as tight as you would ever see in a Broadway play. There is nothing bad to be said about The Color Purple, the musical. It simply took my breath away!

If you haven’t seen this play, see it! If you have seen it, see it again! With a remarkable cast, soulful songs, and voices made for the stage, it would be a shame to not experience such wonderful theater.

The Color Purple, the musical is perfection!

The show runs here in St. Louis through the 7th of the month, and is being presented at the Fabulous Fox Theater by the US Bank Broadway Series. To see when The Color Purple is coming to your city or to get more information about this theatrical production, visit their official site at www.colorpurple.com.

Special thanks to Erin Hentz and the incredible staff at The Fabulous Fox Theater in St. Louis!

Do We Need Black History Month?
“I Got Garnished”