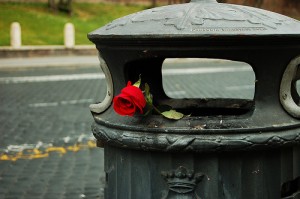 Last Saturday, I was chilling in my Cubicle home office closing out a few projects and I received a text message from a girlfriend saying that her boyfriend of one year had broken up with her. They had been having problems for a few months now, so it didn’t come as a surprise to me. Fast forward like an hour or so later and my BFF called and said that her man of two and a half years sent her a “Dear Jane” email breaking it off. Now this shocked me because I thought they were headed for marriage. I consoled her for as long as I could and continued about my business. Later that same day, I logged into FB and saw two statuses from my girls saying they were single now as they were just broken up with by their boyfriends.

Is there an epidemic I don’t know about? Or are guys breaking up with their girls because Valentine’s Day is almost here?

I don’t know the inside scoop on what happened with my girlfriend’s and their men, but I do know that they felt the break-up was sudden. Which leads me to believe that it may have more to do with the impending day of love than anything else.

I’ve heard this notion before—some guys have joked that girlfriend season begins around fall time and ends right before Valentine’s Day. The reason? What real gentleman wants to spend dough on their girls on an expensive gift and pricey dinner when they can just cut them off and be single and get their freak on?

No harm, no foul.

And while I would like to think chivalry is indeed not dead, I can’t give many men props in this area—the stuff I see on Twitter and Facebook and other social networks indicate that guys are still in the neanderthal era thinking with their dicks and wallets and not much else—rather than spend Valentine’s Day with a girl they really dig, they would rather throw in the towel and keep their coin.

Houston, we have a problem.

Who said it’s all about how much money you spend anyway? Women spend money on their men as well on V-Day, so you breaking up simply because you don’t want to spend the money is really stupid. I hope your peen falls off and and is never found. You could be missing out on a good thing because you are a cheap bastard.

To my girls, I say good riddance. It’s good they showed you their true colors now than to continue on with a dude who has no class whatsoever.  It’s better for you to be single than be with a turd.

Readers and foes, chime in please. Are guys breaking up with their girlfriend’s because they don’t want to spend money for Valentine’s Day? I am anxious to hear your responses.

And if there are guys that are reading this and actually want to get something for their significant others for V-Day, check out Berries.com for affordable Valentine’s Day gifts she will love. Even if you are a cheapskate with miserly ways, they’ve got something to fit your budget!