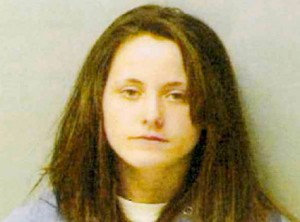 If you did not watch the season of MTV’s Teen Mom 2 last night, then you may not want to read this post. It does contain spoilers, and I don’t want to ruin your DVR experience.

For those of you who did watch he show, you are aware that Jenelle and her boyfriend Kieffer were arrested for breaking and entering and possession of marijuana. Jenelle, who had been arrested at the beginning of the season for assaulting her mother, has become quite familiar with jail. She also lost custody of her son, Jace to her mother, and hasn’t shown making any strides in approving her relationship with her son to win back custody.

In addition, she also stole her mother’s credit card in order to go on a trip to Kieffer’s hometown. Last year, we thought Amber Portwood was a mess—Jenelle is making her look like an angel.

News also broke last week that Jenelle was caught on video severely beating a woman, and was again arrested for this incident.

Out of all of the mothers showcased on the Teen Mom series of shows, Jenelle appears to be the most troubled.

Her penchant for running after men who really don’t care about her along with the disrespectful and almost violent way she treats her mom are signs that she needs severe counseling. I am not one to judge because I am by no means perfect, but Jenelle is going down a one way path to pure destruction.

What I would like to see MTV do is instead of profiting from Jenelle’s dysfunction, get her some help and ban her from the show until she gets it. Right now, Jenelle is the one people most talk about on the show and she is making money off being a “bad girl”. Money ain’t everything if your mind isn’t right, so I would like to see MTV promote mental wellness for their “star”.

What do you think of Jenelle and her latest arrest of her record of being a bad mom? Do you think she needs an intervention?

Would you ever have cosmetic plastic surgery?
New Creme of Nature with Argan Oil from Morocco Giveaway