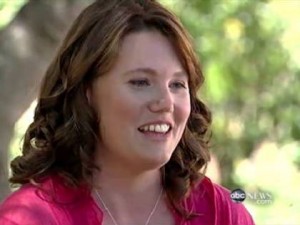 I was out of town on Sunday when ABC originally aired the first ever television interview with Jaycee Dugard, recounting her kidnapping and rape ordeal that spanned years. We’ve heard so much about this woman who was taken as she was waiting at a school bus stop at the age of 11, but there has been limited communication from Jaycee and her family, who was rescued from her abductors in 2009. Jaycee had been away from her family and “hidden” in plain view in her abductors’ backyard for 18 years. She needed time to get her life together for her and her children, so this interview was a win/win for Diane Sawyer.

Through the power of Hulu, I got to see the interview and it had me in tears. I often talk about the resilience being a powerful tool that one can have, but Jaycee’s strength and faith while being held against her will, raped, and abused is one that I am in awe of. The interview held graphic details of the goings on in the house of horrors in which she lived, and at times I winced at the description of what went on. I thought I knew the definition of a survivor, but Jaycee is indeed a survivor of many things.

Watching the moonlight and thinking of her mom, she was able to get through her ordeal. Not giving her captors the satisfaction of seeing her cry, she persevered, even through the most horrible circumstances of birthing two babies by her rapist/kidnapper in conditions not fit for living in or raising children. She never let go of her faith that she would be reunited with her mother and her family.

There is so much that we can learn from Jaycee. When we think that life has handed us problems we can’t deal with, Jaycee proves that through adversity, you can continue to be strong and have. Even now, she doesn’t have rage against the two people who took so much away from her.

Jaycee’s story is of one what the justice system failed. But she doesn’t cast blame on anyone but the person responsible for her captivity.

Jaycee’s story is a sad one, but has a happy ending. She has been reunited with her family and now her children have the opportunity to have some sense of normalcy.

Below is the broadcast of Jaycee’s interview with Diane Sawyer. What are your thoughts?

Jaycee’s book, A Stolen Life, was released on July 12th.

Working Mother’s Most Powerful Moms in Pop Culture
Health Matters: The Importance of Having a Living Will