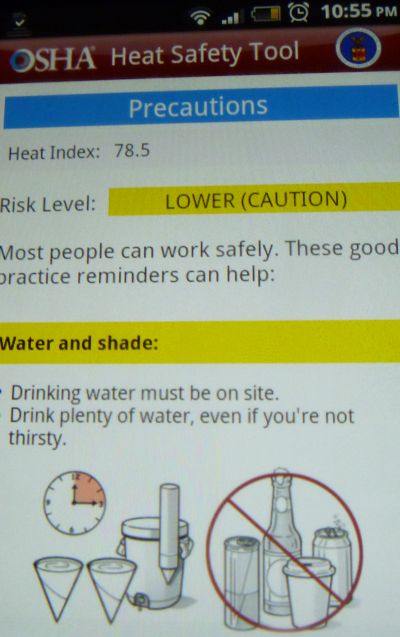 Cubicles come in different sizes, shapes, and styles. In fact, a cubicle doesn’t have to be in an office. I am a self declared Cubicle Chick and I work at home. For others, their cubicle may consist of their truck or vehicle that they work from. It may also include employees who work outdoors in construction, or other occupations that require them to do their job duties outdoors. Because of the extreme heat and temperatures we have been experiencing this year, Hilda L. Solis, Secretary of Labor, released a mobile app earlier this week to help get the word out when it may be unsafe to work outside.

According to a press release sent to me by the U.S. Department of Labor, a free mobile app has been released “that will enable workers and supervisors to monitor the heat index at their work sites in order to prevent heat-related illnesses”.

“Summer heat presents a serious issue that affects some of the most vulnerable workers in our country, and education is crucial to keeping them safe,” said Secretary of Labor Hilda L. Solis.  “Heat-related illnesses are preventable.  This new app is just one way the Labor Department is getting that message out.”

The mobile app uses the data received from the U.S. National Oceanic and Atmospheric Administration along with the worker or users mobile location to gather whether the employee is at risk or not of developing heat related injuries and illnesses.

“Based on the risk level of the heat index, the app provides users with information about precautions they may take, such as drinking fluids, taking rest breaks and adjusting work operations. Users also can review the signs and symptoms of heat stroke, heat exhaustion and other heat-related illnesses, and learn about first aid steps to take in an emergency. Information for supervisors is also available through the app on how to gradually build up the workload for new workers as well as how to train employees on heat illness signs and symptoms. Additionally, users can contact OSHA directly through the app”.

The mobile app can be downloaded by going to http://go.usa.gov/KFE but is only currently available for Android phones. A mobile version of the app for both iPhone and Blackberry are currently in development and will be released shortly according to the press release.

Information for employers about using the heat index to calculate and address risks posed to workers also is available through OSHA’s new Web-based tool “Using the Heat Index: Employer Guidance,” which is accessible at http://www.osha.gov/SLTC/heatillness/heat_index/index.html. OSHA’s other educational and training tools about heat illnesses prevention, available in English and Spanish, can be found at http://www.osha.gov/SLTC/heatillness/index.html.

Gotta love how the Dept. of Labor is embracing mobile apps in order to help outdoor employees! This is yet another example of mobile apps and technology becoming a helpful tool in the lives of everyday people. If you work outdoors or know someone who does, please download the app and spread the word!

Information listed in this blog post was derived from a press release received by The Office of Public Affairs, U.S. Department of Labor. I have downloaded the application on my Android device, but make no claims or guarantees about the application or its use.