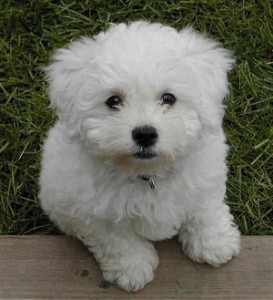 I was living in Florida at the time and my parents had just separated. I was also new to the area and didn’t have many friends, so when the holidays made their way around, I didn’t have a lot of people to spend it with. And since I didn’t have a license and no car, I couldn’t get around much.

I remember looking out the window wishing I had somewhere to go or someone to be with to ring in the New Year. It seemed like it was such a lonely time. The only thing I had in my life then was my poodle, Pebbles. She was the ray of sunshine I needed during this lonely and transitional period.

Pebbles was given to us by a friend of my dad’s. She was an older dog, but very loveable, and as precious as she could be. I didn’t grow up with a dog, so having her took some of the pain away of being alone during what should’ve been a fun time. She took a negative and made it a positive, and I will always remember her for that.

She and I watched Dick Clark’s New Year’s Eve special and she watched me dance to Paula Abdul and a few other of the guests’ songs. When the clock struck midnight, it was Pebbles who I hugged and who reciprocated her love, signaling in 1992. She was an amazing friend, and looking back on it now, even though I was at home by myself without a friend in sight, it was her who showed me the most love. The bond that we had at that time surpassed anything I had in a real life friend. It was loving, supportive, kind, and unending. I would be so lucky to have that type of friendship in my life right now.

Less than a year later, Pebbles got really ill and was diagnosed with cancer. After a few months of trying to take care of her, my mom decided to have her put down, because at that time, Pebbles was suffering. It was so sad to see her go, but I knew she was going to be in a better place.

My family doesn’t have a dog now, but we may be getting one in the upcoming year. The memory of Pebbles, and knowing how she was there for us when we needed her, makes me want to give that same gift to my son and daughter. We will see if we get another dog (I am not sure if I want the task of taking care of a pet), but if we do, I am sure that a poodle will be the way we go.

Do you have any memories of you and your pet during the holidays?

Disclosure: As a part of DogFenceDiy’s holiday campaign I am sharing my happiest holiday pet memories. DogFenceDiy, the invisible fence alternative, is dedicated to keeping pets safe for the season.

5 Great Android Apps to Help You Bring in the New Year
2011: The Year of Midwest Moms for Verizon