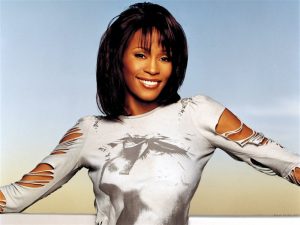 I first became acquainted with Whitney Houston’s music in 1985 (I was 11 years old) when my parents bought her first album. I can still see the album cover. Her short hair slicked back, natural makeup in place, glowing in an island-like backdrop. Peaches and mauves showcased her face, and she was simply stunning. Her voice, amazing—there was no one on earth who could sing a song like Whitney. The way she coddled a song with her vocals, so effortlessly. Her poise, her gait, the way she was playfully classy. She was someone that I could look up to.

The Whitney we saw was not the Whitney that we would come to know later on in her life. She married bad boy crooner Bobby Brown and fought drug addiction. She had issues with her father over money. She was in and out of rehab. Whitney never seemed to be able to capture the magic that took place earlier in her career.

We wanted to root for her, and we did. But then, the inevitable happened.

On the afternoon of February 11th, just a day before the 54th Annual Grammy Awards, Whitney Houston was pronounced dead at the Beverly Hilton Hotel. She was just 48 years old.

I had read rumors in the past few years that newspapers and the AP already had her obituary written. She was one of those celebrities that was on the edge, and any moment, something tragic could happen.

When I first saw a tweet about her death, I wrote it off as a hoax. On social networks, you see a lot of supposed celebrity deaths, so you don’t believe it. But soon, tweets from TMZ and CNN followed, I knew it was true. She was gone.

After sitting for a few minutes dazed and confused, I felt such loss. Not just for the world and for the music community, but for her daughter, her mother, her brother, her cousin, and the rest of her family.

I care not to remember Whitney the way she died, but for the music she left us. Her music is what made her special, her gift, her talent.

Whitney, you are gone, but certainly not forgotten. Rest in peace.

How will you remember Whitney Houston?