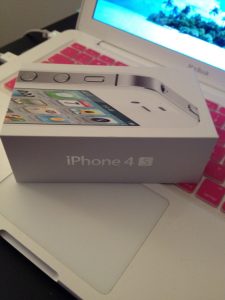 Some of you were with me when I was major Blackberry fan. Then last year, I crossed over to the Android and have been happy with the switch. But as of last Thursday, I became an iPhone 4 S owner.

Yep, I am now rocking the phone I used to detest. In the past, I made no secret about being an anti-iPhone advocate. I saw iPhone users as being highly over the top and dramatical with their praises. They were always going on and on about how wonderful the iPhone was. Totally obnoxious is what I felt about most iPhoners. But there was one thing I couldn’t deny anymore—that the iPhone, despite it’s elite status, is the best smartphone on the market.

The switch to the iPhone came after much thought and discussion. I know plenty of iPhone users that could give me real feedback about the phone, without all of the fluff. And while I was never a fan of the size of the iPhone (my Samsung Galaxy II S screen is much larger than the iPhone and I love the screen real estate), the other pros outweighed that small con. I have been a T-mobile customer for years (and technically I still am since I haven’t canceled the service yet), but decided to go with Verizon so that I could have the iPhone.

As a former Midwest Mom for Verizon, I demo’d a few devices with them and the coverage was always wonderful no matter what city I am in. Their plans are a little more than what I was paying with T-mobile, but their service is better. So it’s a move well made.

So far, the best part of the iPhone 4 S is Siri, your very own personal assistant. It’s amazing to be able to have your questions answered in no time flat. I also love the fact that the phone integrates seamlessly between the Internet, phone, and applications.

And yes, I am anxiously awaiting the release of the iPhone 5.

Are you an iPhone user? What apps must I have on my device?