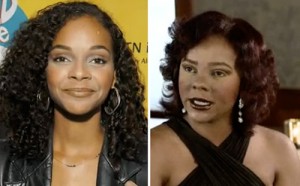 When I was a teenager, I lived for Saved by the Bell. The show came on the scene around the same time that I was entering high school, so it was a program that I watched every Saturday morning like clockwork. Even after school ended, I still found myself watching the reruns on USA. My favorite character was always Lisa Turtle, played by actress Lark Voorhies, the supposed BAP (Black American Princess) of the group. With her curly hair, fresh gear, and amazing life, I wanted to be Lisa. She was everything! I didn’t like how they didn’t have a romantic interest for her on the show (you don’t think Screech counts as a “romantic” interest), because I thought that her character really could’ve brought an interesting dynamic to the show if they showed her dating and such. Such a waste!

Anyway, I am getting away from the topic at hand. Lark Voorhies who played the Lisa Turtle character was fly and fabulous. In my head, I thought I was the Lisa Turtle of my high school. After a few acting roles during the late 90’s, Lark kind of faded away in obscurity. The rumor mill had her engaged to comedian Martin Lawrence (until he broke it off publicly by marrying someone else) and I think she even acted in a soap opera or two. It was if Lark fell off the earth—-then, she appeared online last week looking quite…different.

Internet personality Michael Yo caught up with Lark and interviewed her about her life since Saved by the Bell. When I saw the link of the video appearing on my social networking feeds, I couldn’t wait to catch up with my old BFF (in my head of course). But I was shocked to see that Lark’s appearance had changed so drastically over the years.

I am not sure it it was the makeup or the lighting or plastic surgery, but Lark looked…WHOA. Her whole appearance was alarming to say the least. I didn’t recognize her at all and most people were online commenting about how bad she looked.

Lark, girl, what happened to you?!

Lark and I are only 1 year apart, and I understand that as you grow older, you may want to try to hang on to your youthful looks for as long as you can. But, her appearance was one of more astonishment than anything. Her whole look aged her and it was hard for me to watch the entire video because she looked so weird!

I mean, at this point, I don’t think her high school crush Screech would touch her with a 10 foot pole.

The wonder that was Lisa Turtle is merely a memory now.

I know being a celebrity has us mere mortals thinking that they are held up to a higher standard than we are. But really, seeing Lark heavily made up to look like she looked was more sad than anything. Whatever is going on (and I hope it’s not a medial condition as some are stating), I hope Lark is well. And I also hope she fires whichever makeup artist did this to her face.

I would love to see Lark Voorhies make a comeback, and I am rooting for her.

What are your thoughts on Lark’s “new” appearance? Were you shocked to see how different she looks?

Just Say No to the Mommy Wars
Get Fit Like the First Lady: Take a Peek at Michelle Obama’s Workout Playlist