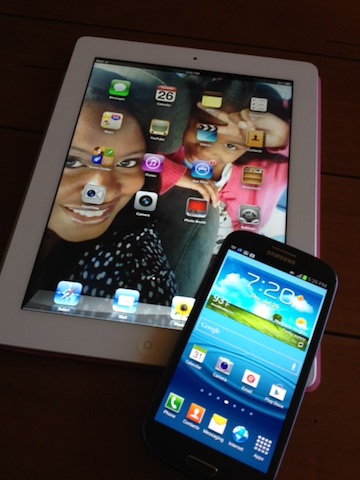 The last few weeks have been pretty busy for me. My travel itinerary has been crazy! And while I am on the go, it’s important for me to have reliable access to the Internet so that I can respond to emails, work on projects, update my blog, reply to comments, etc. The Internet is very important for my entire business, and being out of town makes it that much harder for me to stay on top of everything. Recently, I was given the opportunity to review the new Samsung Galaxy S III from AT&T, which is on their 4G LTE network. I have never been an AT&T mobile customer, so I wanted to see how fast and reliable their speeds were while on the go.

During my recent trip to Squaw Valley in Lake Tahoe, I used the Samsung Galaxy S III to tether WIFI on my iPad 3 and my MacBook. I began doing this while working on replying to emails on my iPad while in the St. Louis airport waiting on my flight. I’ve tethered before (tethering is when you use your current Internet WIFI signal from your device to use it on another device), utilizing my Verizon 4G LTE signal from my Xoom, and most recently, I’ve used my Samsung Galaxy S II on the T-mobile network to work on my iPad as well. I can say that almost immediately, I noticed the fast speed. It has been my experience while in Lambert International Airport that my signal is never really good, and I end up not being able to get much done. Not so with signal on the Samsung Galaxy S III.

Taking it one step further, I tethered again during my layover in Salt Lake City. Again, fast speed. I started surfing so I could really good a good feel at how fast pages were loading and I must say that it was loading much like it does when I am using my home WIFI. There wasn’t much of a difference. I even streamed a few YouTube videos so I could really test out the speed, and I got no pauses or hiccups.

And when I arrived at Reno International which serves as the airport for those visiting Lake Tahoe, I had to wait for my colleague for an hour or so. Again, I used the device as a portable WIFI hotspot to get some work done, and the speed again, was great. Virtually no problems, although it did slow down when I was in a certain area. I moved a little and the speed was back.

While I haven’t been a personal fan of AT&T, I must say, I was impressed with their 4G LTE speed. And this is coming from someone who is a devoted Verizon and T-mobile customer.

I’ve been in Lake Tahoe for 2 days now and the speed is wonderful on the Samsung Galaxy S III. I am mostly using the hotel WIFI which is included in the “resort fee”, but have used the 4G LTE when I have been out and about away from the hotel. 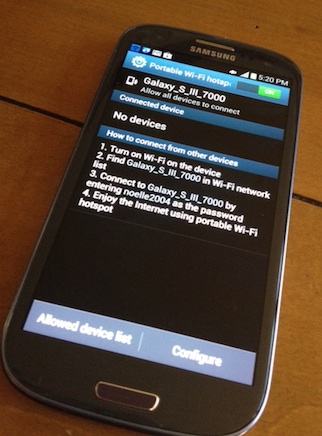 While traveling, having a dependable signal is everything. And being able to use a device to help you work on another device is par for the course. From St. Louis to Salt Lake City to Reno to Lake Tahoe,  I’ve had great coverage and signal.

Myself and my tech contributor Kid Noble, will be giving you more info about the Samsung Galaxy S III, as well as a comprehensive review in the next few days, so stay tuned. Right now, I will tell you that the Galaxy is giving the iPhone 4S a run for it’s money.

What are your thoughts on using your phone as a mobile WIFI hotspot? Do you do this when you travel?

I, The Cubicle Chick, was given a Samsung Galaxy S III from AT&T to review on loan. I was not given this device to keep and have not been compensated or paid for this review. The opinions in this post, as always, are mine. 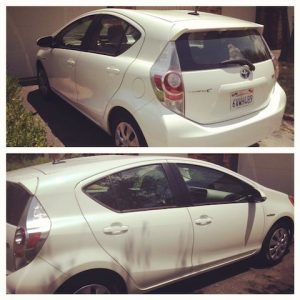 Road Trippin with Grandma in the 2012 Toyota Prius C 3