Welcome back for part two of the Samsung Galaxy S III review! If you missed part one, be sure to check it out!

Samsung’s Galaxy S III is running the most current version of Android, Ice Cream Sandwich (4.0.4 to be exact), as well as Samsung’s most recent version of TouchWiz. The design of this new “TouchWiz Nature UX” isn’t a huge deviance from past versions of the launcher, so past Galaxy users won’t need to make a huge adjustment. 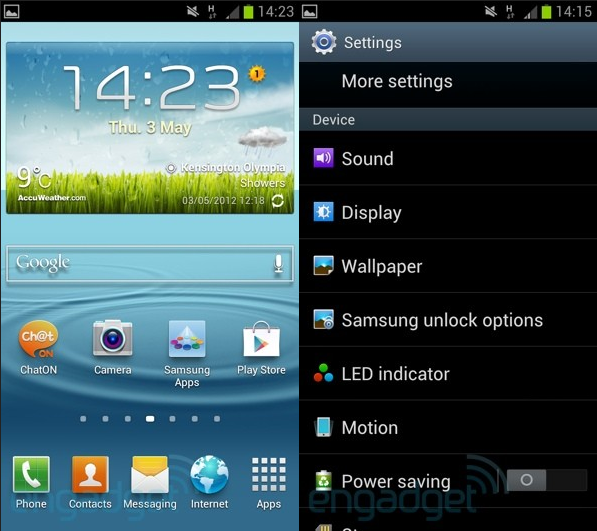 The phone also has many small bells and whistles, which makes the phone even more intuitive. One example is the motion settings. With motion settings activated, you can do simple things like lift the phone to your ear when in a text message thread to call that person, or set the phone to alert you of any missed calls or messages upon picking the phone up. You can also simply cover the phone with your palm to mute music and swipe the phone with the side of your hand to take a screenshot.

A new feature included on this version of the Galaxy is S-Voice, which could (loosely) be compared to Apple’s Siri. It is not nearly as intuitive as Siri, and in all honesty I have used it maybe once or twice. It almost seems as if it was included to simply have something similar to what is featured on the iPhone.

The S III of course features a plethora of widgets for the homescreen. If I could change one thing about this it would be for the TouchWiz UI to feature more consistency in the design of their widgets. The internet browser is the fastest I’ve ever experienced on a mobile phone. I have, admittedly been avidly using the Google Chrome browser more than the stock one, but both load graphics intensive pages quickly.

The other two software features of note on the S3 are Smart Stay and Pop-up Play. The Smart Stay feature uses the front-facing camera to detect whether your eyes are viewing the screen or not. It keeps the screen on if you are looking at it, preventing it from timing out while you’re reading or viewing a video. Pop-up Play allows you to view a video that is saved in the gallery on your device while doing other things on the phone, playing the video in a small, movable pop-up on the screen. It works similar to picture-in-picture on a television.

As I mentioned earlier, the Galaxy S3 features an 8 megapixel back camera with flash. It also features a 1.9 megapixel front facing camera. Some may think that the S3’s camera isn’t an improvement over the 8 megapixel in the S2, but I beg to differ. Because of upgraded software and optics, the pictures are much sharper, crisper, and cleaner with brighter colors. The camera also snaps pictures faster than it’s predecessors. There is also a burst mode, allowing you to capture multiple pictures within seconds. Within that burst mode, there is also a “best shot” feature which will take 8 consecutive pictures and choose whichever one came out the best.

The camera and gallery apps allow the user to automatically tag friends in the pictures based on info from your contact list, although I’m not quite sure what the usefulness of this is yet.

The S3 also does a great job with video. The camera supports shooting up to 1080p resolution, and records as 29 frames per second. Everything is very smooth in video playback, but does suffer some in darker settings.

All in all, the phone features one of, if not the best cameras on the phone market.

Overall, this is an outstanding phone, and I feel safe at this point saying it is arguably in the conversation for the best Android phone on the market with the HTC One. Like every phone, it has its setbacks, but it’s positives outweigh the negatives. I have personally been using Sprint’s version for about two weeks now. I is a bit frustrating not yet being able to experience the 4G LTE speeds because of Sprint’s network, but that will change soon (The Cubicle Chick covered the AT&T LTE version, which from her assessment is lightening fast). The size of the phone also may be problematic for users with much smaller hands than mine.

However, the beautiful screen, intuitive operating system, and pure speed and responsiveness make this phone a definite buy for high-end phone users.

Do you have the Galaxy s III yet? Are you planning on getting it? What are your thoughts? Let us know in the comments below!

TheCubicleChick.com was given a Samsung Galaxy S III from AT&T to review on loan. We were not given this device to keep and have not been compensated or paid for this review. The opinions in this post, as always, are those of the author. 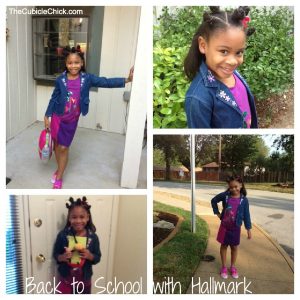 Celebrate Back to School with Hallmark: Review & Giveaway