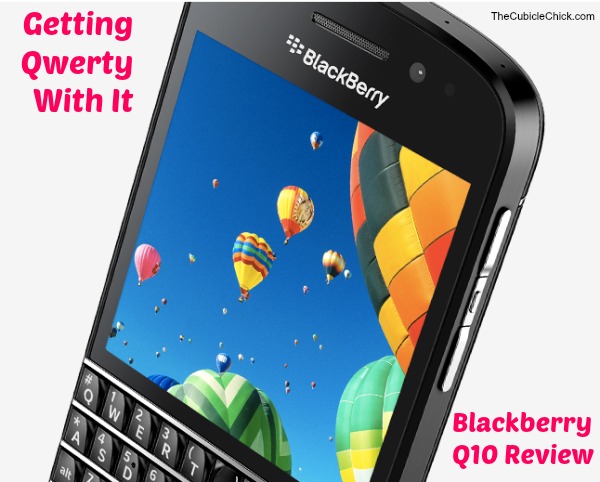 I am fully entrenched in that touchscreen life, but I will always have a spot for qwerty keyboards on phones. As a former Blackberry enthusiast who started off rocking a Pearl in 2006, I came to love the qwerty. Being able to have a full functional keyboard really makes it easy to type and communicate. I was recently sent the Blackberry Q10 from Verizon, and my expectations were low. Two months ago, I reviewed the Blackberry Z10, which left a lot to be desired (you can read the review here). Initially, the Blackberry Z10 and the Blackberry Q10 are the same phone with the same updates. But of course, the Q10 sports a qwerty keyboard, and THAT, is where I feel it is a better phone.

Blackberry Does Have One Advantage

Where Blackberry tends to dominate is in its email delivery and encryption. With the qwerty, not only are you able to respond to emails without feeling like there will be a lot of mistakes, but you can do so rather quickly and efficiently. Business users will love the Blackberry Q10, and will find it a little more easier to communicate with on the fly than with the Z10 and other touchscreens.

In addition to the qwerty, the Blackberry Q10 also has a touchscreen that you can use to navigate and use applications. I find that a phone of this caliber can give you the best of both worlds (kind of what the old school Blackberry Storm was supposed to do in the days of old).

But, Here’s the Issue…

There are still the same problems that exist with the Z10 device—a lack of applications on the Blackberry platform makes it a distant fourth behind Android, iOS, and Windows Phone. But for business users who may not need to use Instagram or other hot applications, they can find this device one that can help them run their businesses.

But Does it WORK?

The size of the phone is appealing. It’s small, light, and easy to carry without being cumbersome. I found the phone had less of a lag and app interruptions than the Z10 did. No shutdown while I was doing tasks, and it was pretty smooth as I transitioned from app to another. The camera is serviceable, but still not on point with Samsung’s Galaxy III and IV devices. Battery life, however, is epic. Kudos to Blackberry for finding a way to have a smartphone that doesn’t suck at power.

So here’s the lowdown:

If you are still Team Blackberry, I would suggest a Q10 over the Z10; in terms of a fully functional touchscreen, Blackberry still needs to try again. But where they excel (and always have) is with the qwerty design, so this newest device on their platform works well and is efficient for most business users. For those of you who prefer a device that entertains, I can’t see the Q10 being a device you would like.