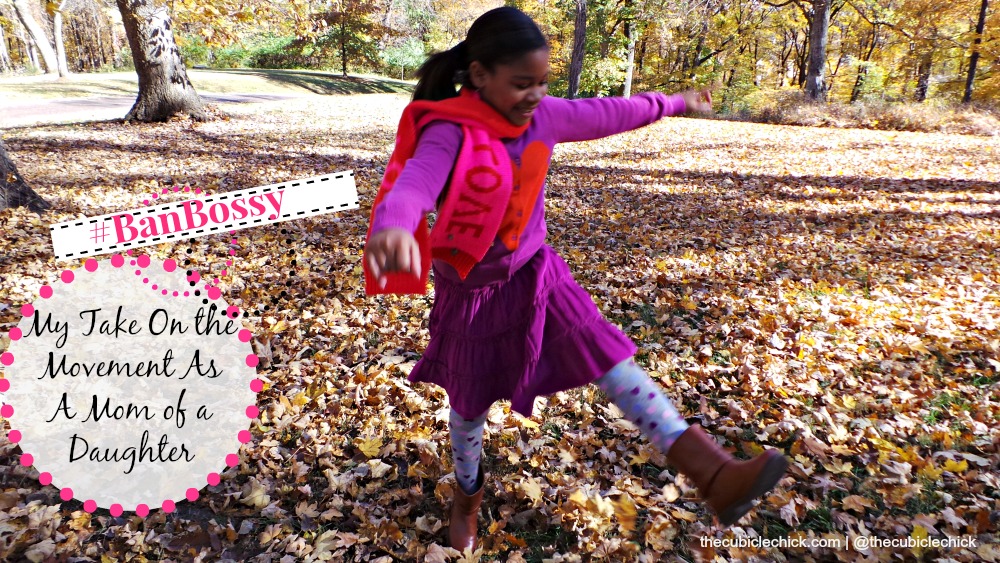 I have been called bossy for as long as I can remember. Being an overly-assertive little girl turned woman who’s a boss never made me feel inadequate. I thrived in my bossy title, and although some frowned upon it, I coveted it with pride. Yes, I’m bossy. I am a boss. I run several web properties. I have a staff of writers. I have consultants who work for me. Before I became a webpreneur, I was a HR and Hiring Manager with employees. So being a boss is pretty much all I know. And being called bossy is quite fitting and on-point.

My daughter, however, isn’t as aggressive as her mom, but she’s also still a boss. Where I am dominating and somewhat severe, my daughter is more timid and reserved. She plays the role of bossy without being “bossy” (i.e. the term folk use when they see a young girl show some moxie)—she lets others think they are leading when, in essence, she is the one leading. Her quietness is something I wish I had growing up. Kids shied away from me at times because of my bravado. But my daughter? They flock to her because she is so nice, and boom, she is so likable that you can’t say no to her. She’s bossy in her way. And I am glad for that.

I do understand the notion that while boys are looked to as boys being boys, girls who are assertive and are outspoken are bossy, totally a negative connotation. It isn’t fair that girls have to be called bossy because they are independent and headstrong. Boys aren’t bossy because, well, they’re too busy being boys.

But my thing is this—in order to change the perceptions of bossy, we shouldn’t ban it. We should open up a dialogue so that others can understand that bossiness isn’t a bad thing. And it isn’t a scarlet letter either. It is something that girls should be proud of, and it isn’t a bad thing. Banning it is saying that instead of trying to get people to see the vision, let’s just totally transform it into something else. And I appreciate the conversation that #BanBossy has started, but I don’t appreciate the message. Ban drugs. Ban bullying. Ban sodas and unhealthy foods in schools. I could list hundreds of things that need banning. But bossy isn’t one of those things.

Thanks Sheryl Sandberg, but no thanks.

I know I am a little late with my take on all of this, but I wanted to be able to process my thoughts and wrap my head around it. I can’t support something that isn’t going to make my daughter feel just right the way she is. I want her to know that it is okay to be called bossy. She’s a boss! And she got it from her mama. Honestly.

For those of you pro-BanBossy movement, let me tell you that it is all love. But in this home, we aren’t banning it. We are thriving in it. We are living in it. And we are empire building with it. Girls can lead without banning bossy.

And there you have it.

If you want to learn more about #BanBossy, click here.