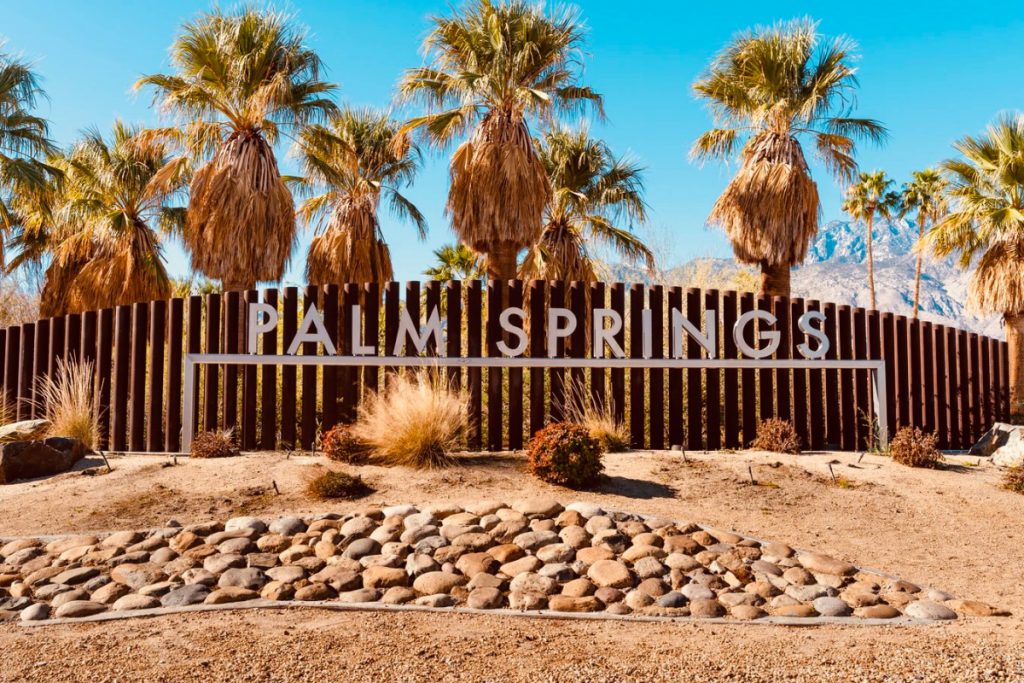 Palm Springs has been on my radar for awhile. For some, the city in the middle of a desert is known for Coachella, and for others, health and wellness. Its dry climate and air became popular in the 1920’s and 30’s as a place that people with respiratory health issues could come and get better. In the 40’s, it stood as a mecca for the Los Angeles celebrity crowd.

After the 60’s and heading into the 70’s, the interest in Palm Springs waned and was re-birthed as a destination for snow birds and retirees. Now it serves as a hip and trendy place that attracts both old and young alike. I’ve been wanting to visit Palm Springs for years, so for my birthday weekend, my guy made it happen and viola! 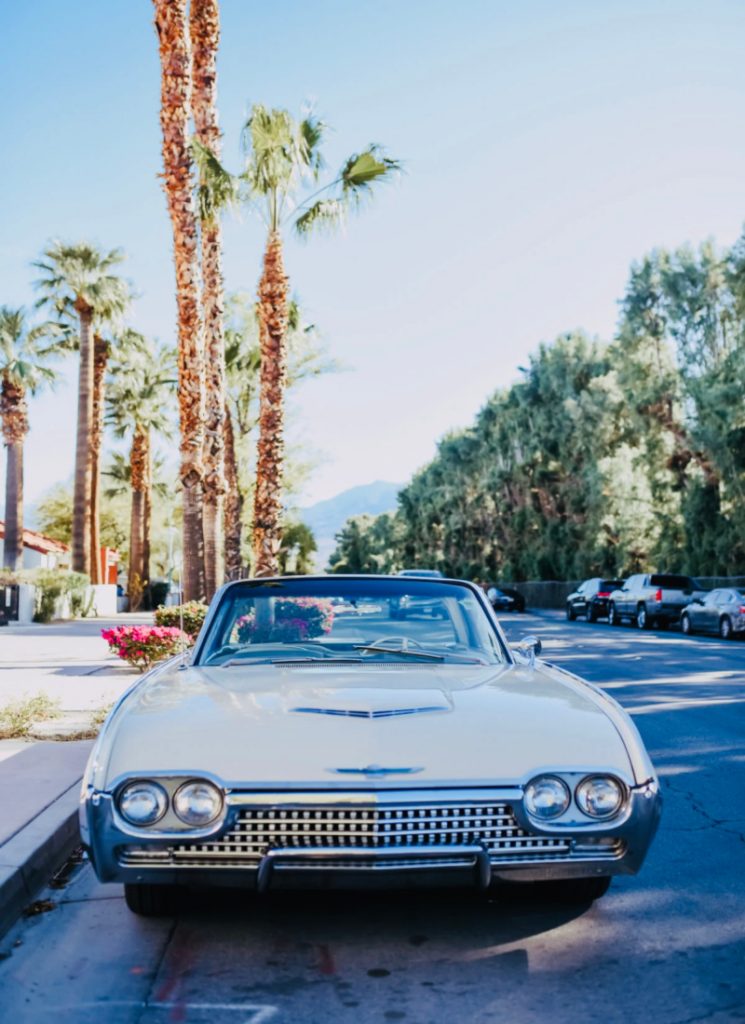 The Cubicle Chick was in the thick of Palm Springs.

One of my favorite things to do as of late is stalk celebrity homes and such. During a whirlwind 24 hour visit to Palm Springs, I looked up some of the past addresses as it has been a vacation destination for stars from the stage and the screen. Everyone from Lucy and Desi to Ginger Rodgers to Bing Crosby to Liberace all owned vacation homes in the area during their prime. Being as how it’s a short jaunt from Los Angeles, Palm Springs and its surrounding areas gave celebrities respite from the bright lights of cameras and flashbulbs.

I checked out seven iconic celebrity homes in Palm Springs, and I am sharing them right here alongside some history for good measure.

If you are a celebrity watcher, this post is for you!

Nat “King” Cole’s Palm Springs home was used for vacations and for family time. After his death, it was owned by his daughter Natalie Cole, and may have hosted other celebrities.

Nestled in a quaint neighborhood amongst gorgeous architecture, the yard shrubbery covers a lot of the front of the home, but you can tell it’s a well-maintained property. 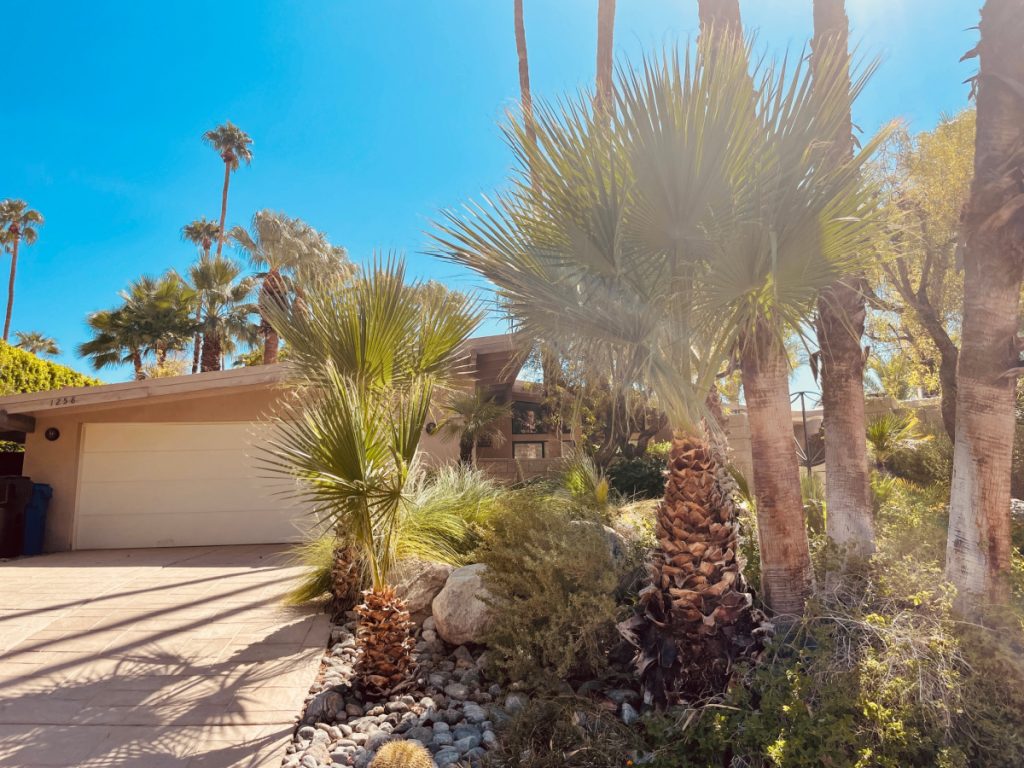 Located at 1258 N. Rose Ave., Palm Springs, I was unable to see records of who currently owns the home, but according to Zillow, it has four bedrooms and three and a half bathrooms and is worth 2.2 million.

Coined Twin Palms, it was also known as Frank Sinatra’s home in the desert (if those walls could talk, honey!). Located at 1148 East Alejo Rd, it is a mid-century modern house in the Movie Colony–El Mirador neighborhood of Palm Springs, California according to this website. Designed by designed by E. Stewart Williams, it was commissioned by Old Blue Eyes himself in 1947. 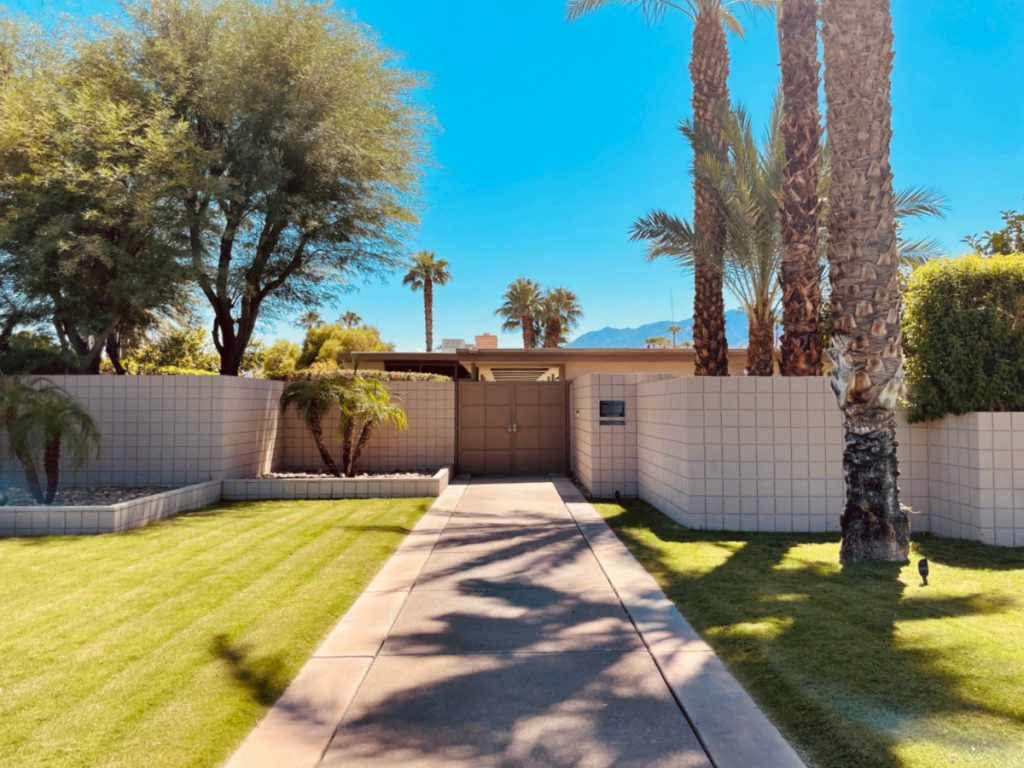 In 1960 after JFK won the election, he planned to host the President-Elect for a congratulatory party, but JFK’s handlers thought it would look bad, so they had the party at Bing Crosby’s Palm Springs estate instead. Frank never talked to JFK again, and some say the diss caused him to become a card carrying Republican afterwards.

The home is listed on the National Register of Historic Places. I could not find any current information on how much the home is worth or square footage details, but it is currently owned and not on the market.

Elvis Presley’s Honeymoon Hideaway in Palm Springs is the most popular place in the town to have your photo taken. It is the scene where Elvis and Priscilla whisked away to after they were married in Las Vegas on May 1, 1967. 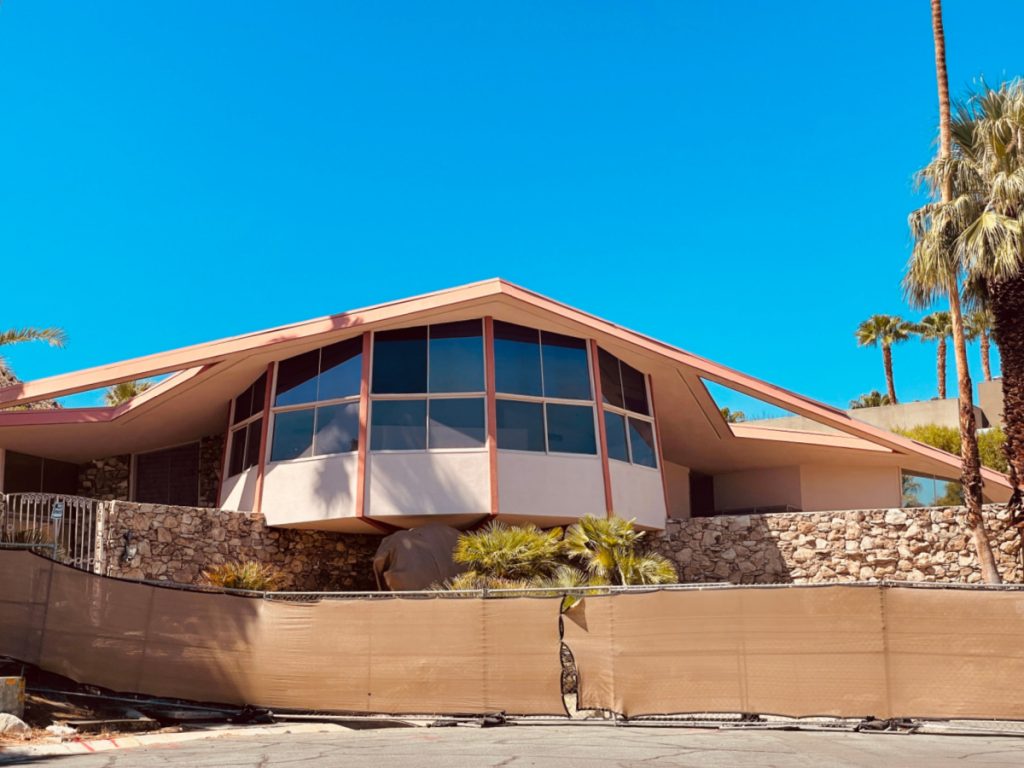 During my visit it was clearly under construction, but its iconic window-centric design was recognizable. A tour bus and another car looking to take photos in front of it as well joined me, too.

You can rent the Honeymoon Hideaway (I believe), although currently it is not available.

Just around the corner from Elvis’ Honeymoon Hideaway is Sammy Davis Jr.’s Palm Springs manor. Not too much is known about the house, but it was allegedly purchased during the 60’s heyday of The Rat Pack era. 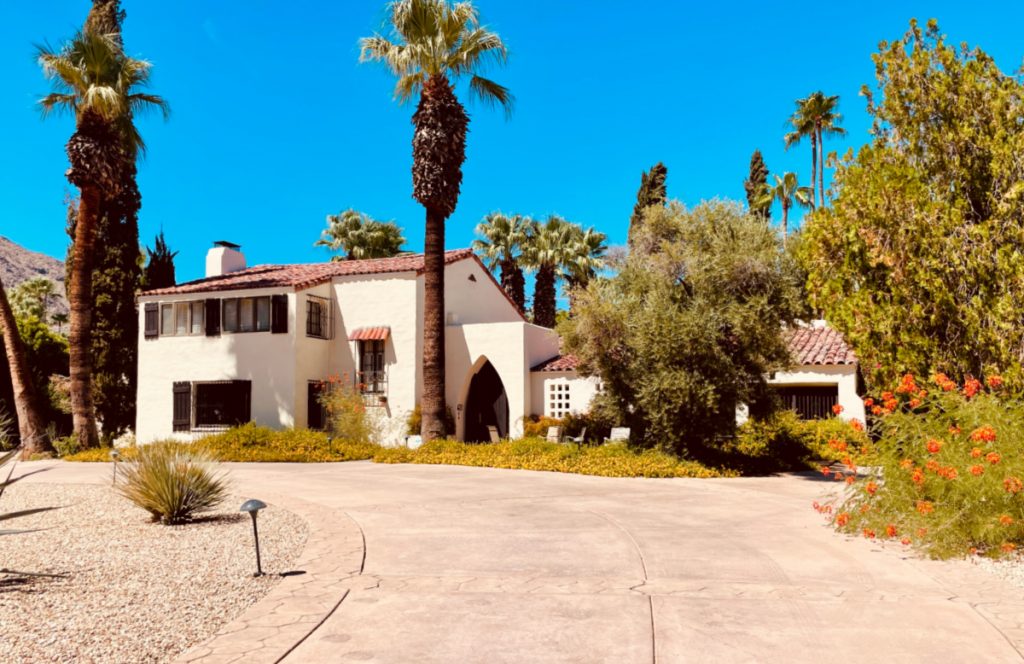 515 West Via Lola stands the former Palm Springs residence of famed actor Kirk Douglas. It has been given the distinction of historic status, and was built in the early 1950’s.  The home was recently valued at $3.5 million and was last purchased in 2016. 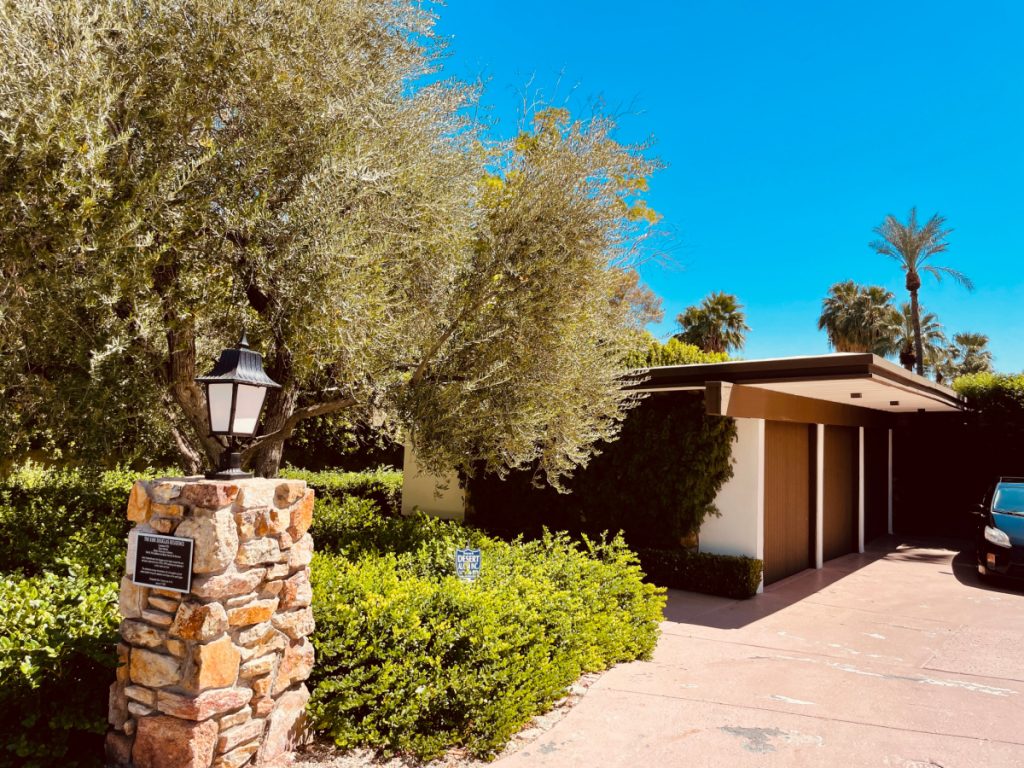 According to this article, Frank Sinatra occasionally cooked dinner there and the adjacent home belonged to Dinah Shore.

Jerry Lewis’ desert hideaway at 1349 S. Sagebrush was built for Jerry in 1957. It’s also the home in which he wrote the script for The Nutty Professor. It’s now valued at $2.25 million and features a spacious layout with a four bedrooms, three bathrooms, and a pool. 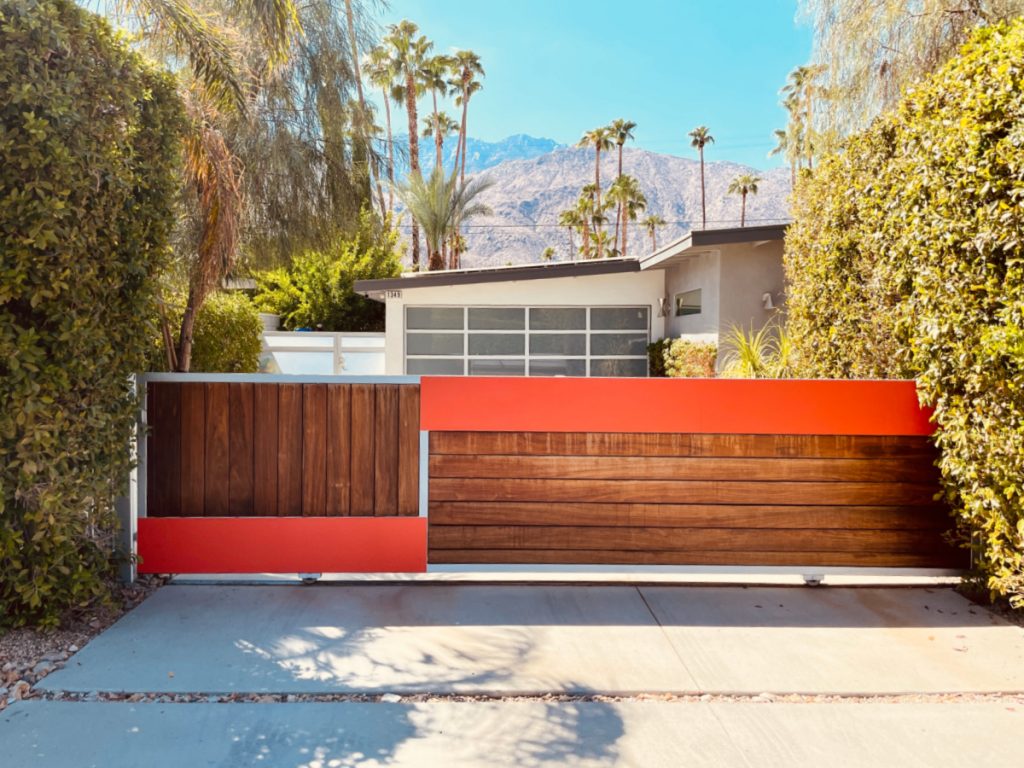 Walt Disney’s Palm Springs home was referred to as Walt Disney’s Technicolor Dream for its colorful aesthetic (which was red during his time living there). The home was built for him and his wife to enjoy are a retreat during their later years. I wasn’t able to see much of the home, but you can get a see more on this site. 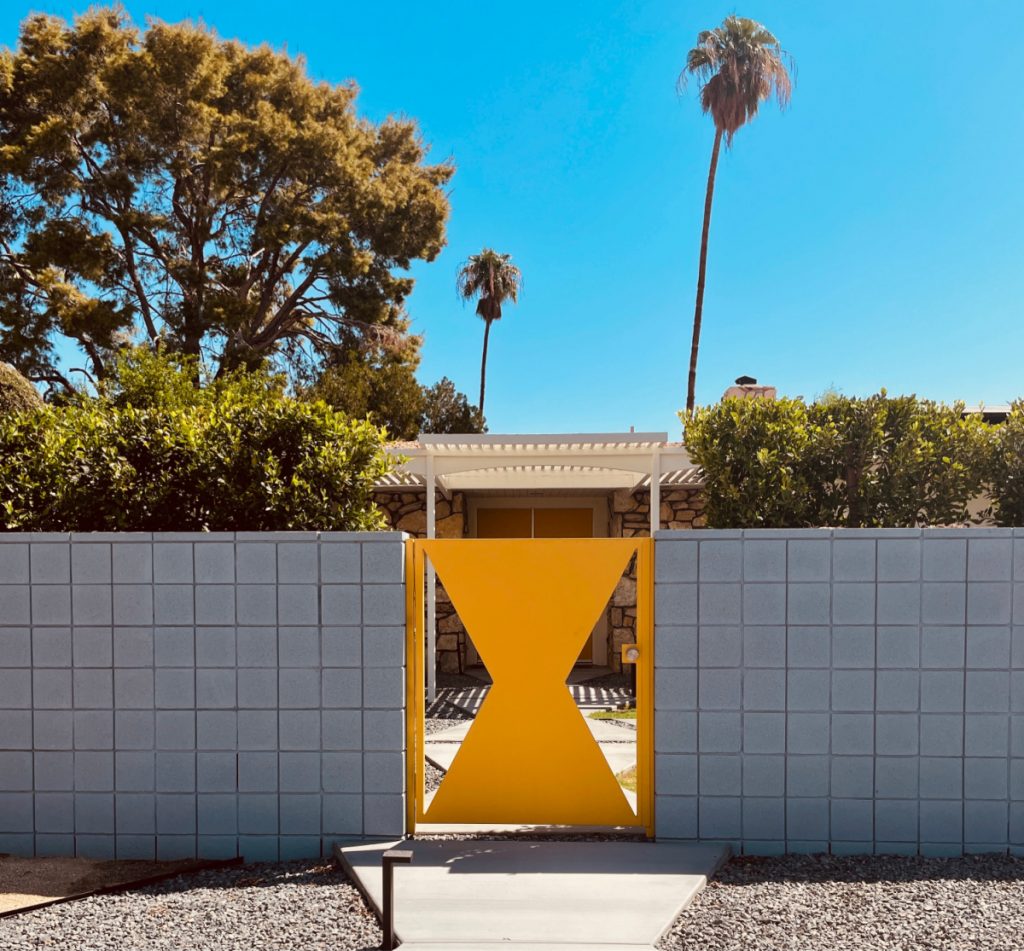 If showcases the mid-century modern look and feel that many of the homes in Palm Springs feature, and by the looks of these photos, it truly lives up to its name.

Which home is your favorite? 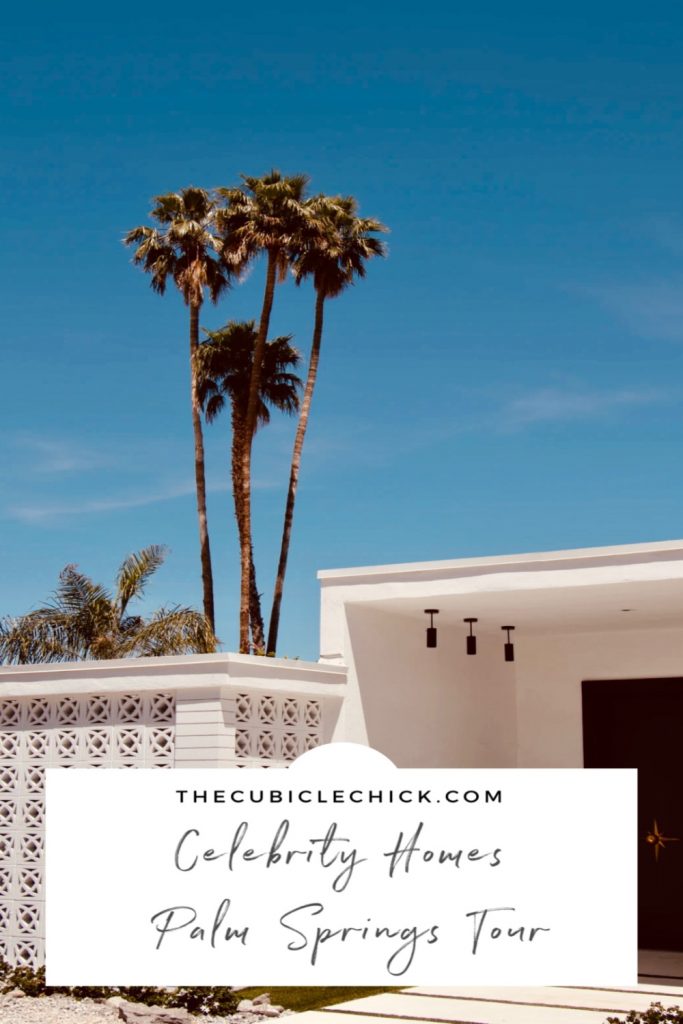 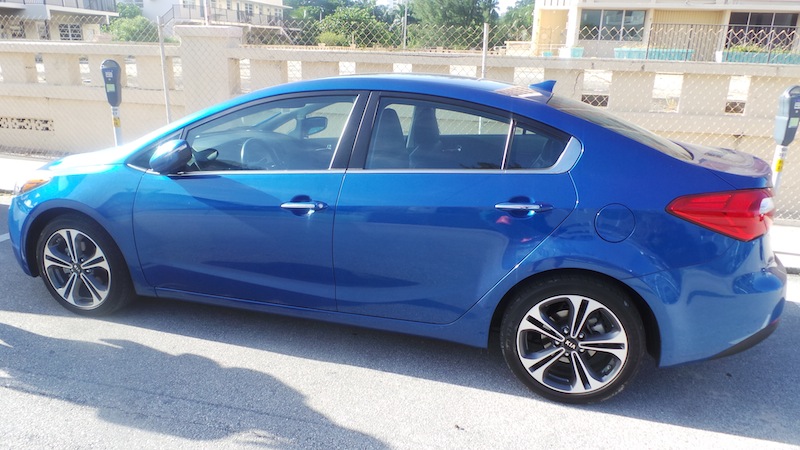 Miami Nice: Traveling Around South Beach in the 2014 Kia Forte EX
5 Tips To Help You Stay Active In Your Child’s Education 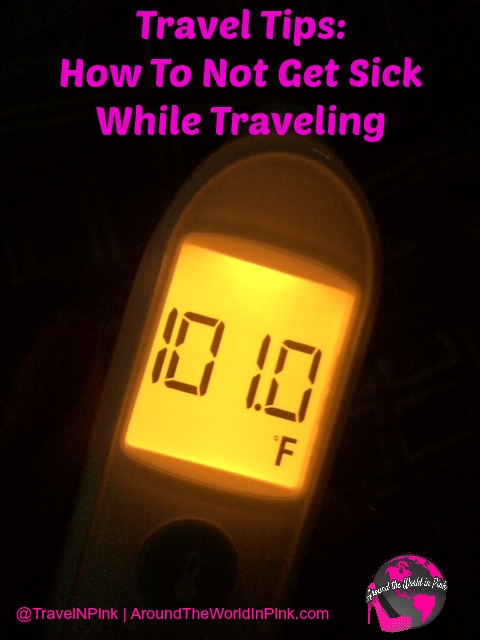 #TravelTuesday: How To Not Get Sick While Traveling & Car Hotspots 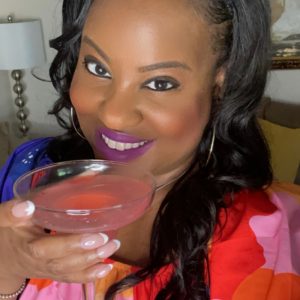 This is 46: Happy Birthday and Things of That Nature