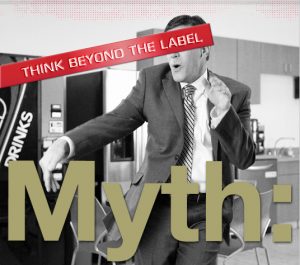 While I was perusing the boob tube today, I came across a television commercial about disabilities in the workplace. I am not sure if you have seen it before, but it has a great concept and makes a good point without being too preachy. I took the liberty of posting it for you just in case you haven’t had the opportunity to see it:

I think that this commercial hit the nail right on the head. The people behind the commercial, a think tank called Health and Disability Advocates, did a good job expressing their point. There are a lot of folk with disabilities in the workplace and we should embrace those differences and challenge ourselves to learn more about one another.

Think Beyond the Label is committed to making the business case for employing people with disabilities. We are a partnership of health and human service and employment agencies with federal grants, coming together to build a uniform national infrastructure and approach that connects businesses to qualified candidates with disabilities. Our goal is simple: to raise awareness that hiring people with disabilities makes good business sense. Employees with disabilities have unique, competitively relevant knowledge and perspectives about work processes, bringing different perspectives to meeting work requirements and goals successfully. Hiring someone who “thinks outside the box” might be thinking too small when there’s an opportunity to hire someone who lives outside the box.

I am very proud of this campaign and what it represents and stands for. I am hoping that it continues to open minds and causes employers and employees to “Think Beyond the Label”.

What do you guys think of the campaign? Does your employer do a good job employing those with disabilities?

It’s Cheaper to Be Fat
I Hate My Job