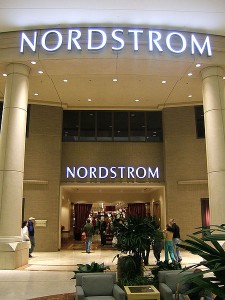 While many department stores are already filled with holiday cheer, Nordstrom says no to the Christmas creep.

A few weeks ago, I walked into a major department store and saw the beginnings of the holiday season in terms of decorations and displays. The red and green coloring mixed with gold made me a little excited about the upcoming holidays. But it also gave me a sense of dread because I wasn’t ready to confront that time of year yet—why Halloween hadn’t even reared its head yet and here I was already seeing Christmas trees and faux wrapped gifts. I even went on Twitter and voiced my opinion for this particular department store rushing the holidays.

According to signs placed in nearly all of their stores, Nordstrom will not be decorating the store for the holidays until the end of November.

“We won’t be decking our halls until Nov. 25. Why? Well, we just like the idea of celebrating one holiday at a time.”

Department stores call the time leading up to Thanksgiving the “Christmas creep”. Of course, buyers subconsciously begin buying items for the holidays when they see holiday decorations and sales. It’s as if the stores determine what we are to buy and when, not the other way around.

Nordstrom is taking a different approach to the holiday season.

“It’s our tradition that we wait,” said spokesman Colin Johnson. “Our customers seem to understand and appreciate why we take this approach.”

I applaud Nordstrom for sticking to their guns and waiting before decking the halls in their stores. Two days ago, I was in Macy’s and they are fully into the holiday decoration mode with their Believe campaign. And while I like the campaign (especially the letter writing to Santa), October is too early for Santa and his elves.

What are your thoughts? Is Nordstrom being a Scrooge by not following the trend of decorating early?

Sidenote: Nordstrom typically does not decorate its stores before the Thanksgiving holiday, and has not done so for years.

Moving Into a New Home Means One Thing: Redecorating!
New Episodes of All My Children to Debut Online in January