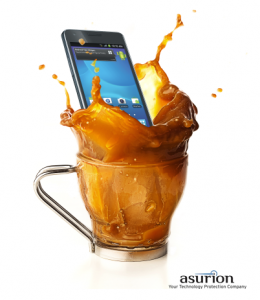 As a Digital Debutante, it is a must that I have a smartphone. I purchased my first smartphone back in 2004, a Palm Treo that I absolutely loved. I went from a Treo to a Blackberry Pearl to a Blackberry Curve, to a Blackberry Bold, to an Android, and now to the iPhone. That is a lot of phones. And thankfully, I had insurance on each device just in case. I’ve had my share of cracked screens, and even left one of my phones in my pocket and washed it. Of course, it didn’t work anymore, so it was off to the store to get another one. And I’ve even lost my phone and had to get it replaced. There were no worries because I had insurance to replace it.

According to a recent Asurion Infographic, 80 million people damage their cellphones in the United States. That’s 2.5 phones per second, 152 devices per minute, 9, 132 phones per hour, and 219, 178 mobile phones per day!

With our busy lifestyles, it’s easy to accidentally drop your phone and crack the screen, or accidentally get it wet beyond repair. That’s why it’s important to have insurance on your device. I know with a teen, it gives me a peace of mind that if he accidentally destroys his phone, it is covered.

The month of July is the most damaging month for cellphones. According to Asurion, more phones are lost, stolen, or damaged in the month of July than in any other month. Maybe it has something to do with the heat!

Whatever the case and no matter the phone, it’s a must-have to have insurance for your phone. The few bucks you spend a month on it is well worth it because you never know when you will have to use it. And who has money to pay the full-price for a phone these days?

Asurion and I want to know what’s the worst thing you’ve done to your phone in terms of mobile mishaps. If you share your story in the comment section below, you could win a $40 iTunes or Amazon gift card. This giveaway ends August 28th, 2012 at 6pm CST. A winner will be selected at random. This giveaway is open to U.S. and international readers, void where prohibited.

I, The Cubicle Chick, received compensation for this blog post. All opinions shared in this post are mine.

Content and/or other value provided by our partner, Asurion.