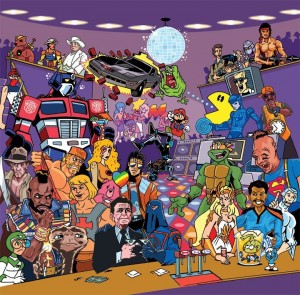 The other day, I wrote a blog post about the return of the twins of Sweet Valley High, which will be chronicled in a new book by SVH author Francine Pascal in March of next year. While responding to tweets and comments about Sweet Valley High, The Babysitter’s Club, and other 80’s books that many of us read, a lot of other things involving 80’s pop culture came into play. There were so many things that made the 80’s like the coolest decade ever—Michael Jackson was The King of Pop then and wore a glittery glove on one hand, the show Silver Spoons made Ricky Schroeder and Alfonso Ribero stars, and Madonna christened the first ever MTV Awards by rolling on the stage floor in a makeshift wedding dress singing ‘Like A Virgin’. The 80’s were a pivotal time for music, pop culture, and entertainment.

Here are just a few things I remember (and miss) from the 80’s. Feel free to use the comment section to add your own 80’s memories:

For my top 15 80’s movies, click HERE. What are you favorite memories/highlights from the 80’s?

TheCubicleChick.com Has A New Design!
Footnotes, Paperclips, & Links—Check Out These Blogs