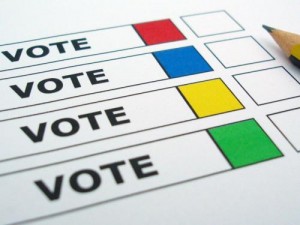 The very first time I voted for anything was in 1996 when William Jefferson Clinton ran for President for the second time. I was a fresh faced 21 year old that thought my one vote could change the world. I remember bringing my then 2 year old son with me inside of the voting booth and allowed him to chisel away at the candidates I had selected, pointing to the name and divot so he could point the sharp poker into the hole—it was all so simple then.

The second time I voted was in the infamous Gore v. Bush debacle of 2000 and we all know how that ended. I was going to give up on government totally but then…

A change was ‘gon come. In the way of Barack Obama. Hope floats and my head was in the clouds.

The night he was elected, I cried my heart out in my living room. Democracy was a beautiful thing and my dream, our dream had been realized. I was euphoric. I think we all were because this was such an historic event of epic proportions. Almost two years have gone by and I still can’t put it into words.

One man could work hard to change the world and the way we viewed it. But he cannot work alone and cannot do it alone. I am patient but others are not. As Americans, we all seem to have short attention spans.

So as I fast forward to this year’s mid-term elections, it is a bitter pill to swallow. The hope and happiness that we had just two years ago has turned into a jagged little pill—we are all choking on our own medicine, struggling to make heads or tails out of our economic situation and standing in the world. All I see when I tune into television is the same ‘ole bipartisan foolishness that never gets us anywhere. The right points the fingers, the left plays coy as if they do not have a voice. And while there is enough blame to go around to both sides, the message gets diluted.

I am not a political pundit by any stretch of the imagination and I have never written about politics on my site—I try to keep it lighthearted and fun in my little cyberspace condo. But really, something has to give, and even I as the “happy-go-lucky blogger” that I am cannot ignore the big picture.

I am the mother of two children—what are we leaving them with?

What are we teaching them in terms of government and politics?

Flashy ads with little substance and nothing to show for it.

Makes me want to turn off the television completely, at least until after the election.

I am so disenfranchised with politics and the powers that be. We need to get it together.

What are you thoughts on the midterm elections? The mudslinging, the endless ads? And where is the real message and real solutions? Let’s discuss!

NFL Wife Creates A ‘Company’ That Can Keep Your Husband Faithful
Show Me the Blog: Things I Learned Through Planning & Executing a Conference