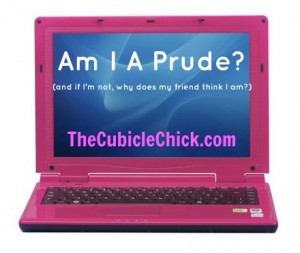 Recently, I asked a few of my friends to describe my personality for a self discovery exercise I was working on. One of my friends said I was “happy go lucky”. Another said I was “loud and boisterous”. And a very good friend that I have known for over 15 years said that I was “amazingly addictive”, whatever that means. While assessing my virtues that were described by others, I was mostly in agreement of the adjectives they used to define what I am like. But, I was shocked by one of my friend’s critical answer—she called me “prudish”.

Me? Prudish? Like, really? I am so not a prude at all. I have a sense of humor, I love to laugh, and I can get downright nasty when it warrants it. So I was very taken aback by that title.

I asked her why she said I was prudish, and she told me this: “You don’t curse. You’ve never smoked a cigarette or tried drugs. You don’t drink for the most part. You don’t have any tattoos. You are very dainty and Southern Belle-ish. Simply stated, you are a prude.”

I wanted to slap the heifer (and I use that as a term of endearment) but she may have had a point. There may be an air about me that is standoffish or prudish because I do carry myself in a certain way, especially when I am first getting to know you. I have never smoked a cigarette in my life, that is true. And I have never experimented with drugs—I never inhaled or exhaled pot. I never wanted to. And as for tattoos, I never wanted one (here’s why). But does this really make me a prude?

{Look at me, I’m Sandra Dee, lousy with virginity….}

Let’s stop there. I was a teen mom. Pregnant at 17, gave birth at 18. So as far as that whole virginal thing until marriage, I left that a long time ago. And I would think that being a mom at the age I was would make me far from being a prude.

Not that being a prude is a bad thing. I mean, prudes aren’t bad people, are they? No. I just think of a prude as an ice queen, someone who doesn’t show emotion or one that gets embarrassed by sexuality or nasty jokes. I’ve never been one to get out of sorts when someone is brash or crude.

But I do have values. I do not curse, simply because I want to be a good example for my children. I always thought cursing was overrated, anyway. But if one doesn’t curse, or do drugs, or drink heavily, does that make them a freaking prude?

Hell, I love hip hop music, laced with profanity and misogyny. Would a prude listen to Kanye West, or Jay-Z, or Drake?

So, Liz, I have to disagree with you. I am 36 year old bombshell diva. And I am not a prude. If you have any complaints about that assessment, please address them to the manager.

What constitutes being a prude these days? Do I sound like a prude? Am I guilty of prude shaming? Am I in denial? Are you proud of being a prude? So many questions, so little time! Comment below and sound off!

Got Jealousy? When Envy Rears Its Ugly Head. Is It About Them Or Me?
8 Reasons Why You Should Stay On Your Diet