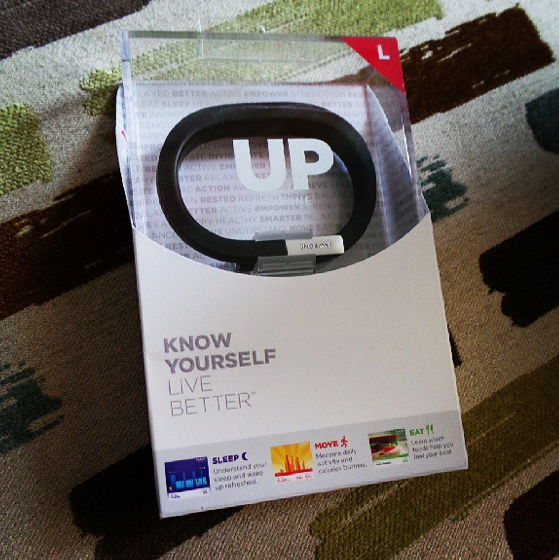 Last month, I blogged about the FitBit One and how it was making my Work at Home life better since it encouraged me to move around more (read the review here). Recently, Verizon sent me the Jawbone UP to use during BlogHer to track my activity and measure it against other activity trackers I’ve used in the past. I ended up leaving the Jawbone UP at home, and didn’t get to use it at all during the conference (). But during my most recent trip back to Chicago, I did get a chance to use it then, and I must say, it impressed me even more than the FitBit One did.

For those of you who may not know what an activity tracker is, it’s a device that wirelessly tracks your movements or steps, your sleep, and your caloric content and what you eat. Doing so helps you stay motivated and active while giving you a real sense of what you are doing on a daily basis. For some, it has given them a new lease on life. For me, it encourages me to get moving every so often and step away from the desk. Since using an activity tracker, I’m more aware of my steps and movements, and I have lost five pounds. Using one definitely is a positive influence.

There are many activity trackers on the market. One is the FitBit One which I reviewed previously. I loved the FitBit One and thought it couldn’t get better—but it did with the Jawbone UP. I will tell you why:

All in all, the Jawbone UP is one-up’ing the FitBit One. There is no competition, especially for those with a more active lifestyle.

UP by Jawbone retails for about $129.00. You can find it for less on Amazon or eBay if you hunt around and comparison shop.

No matter what activity tracker you use, you should use one. There’s nothing like being able to visually see your accomplishments. I highly suggest the Jawbone UP, but purchase the one that is right for you and your budget.