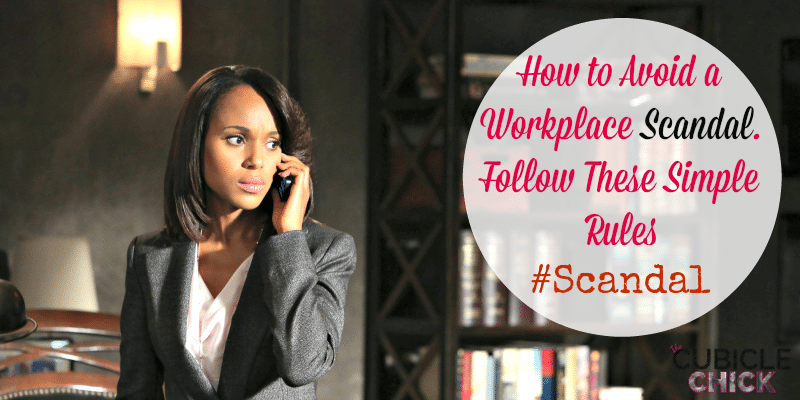 A new season of Scandal is now in our midst, and we are going to finally see Fitz and Olivia in all of their relationship glory. After years of hiding behind the scenes and not being an official item, we just may see their coming out party. Of course, it wouldn’t be Scandal if there weren’t some twists and turns along the way, so wedding invites are probably on the back burner, but all eyes will be on the couple as we learn what will happen next.

I’ve written about Scandal many times before, and more importantly, what we can learn from Olivia Pope in terms of our careers (see: Five Olivia Pope Work Habits for Success). But what I haven’t discussed is the blatant no-no’s Scandal represents in terms of being a true professional. Bedding your “boss” and someone you work for and carrying on a torrid love affair is a surefire way to get blacklisted professionally. On television, it is cause of high ratings and a remarkable storyline, but in real life–well, I can almost promise you there will be no happy ending.

So, since Olivia Pope is my current muse and Scandal is my favorite show on television (right behind Empire of course), I thought I would talk about what NOT to do in the office as it relates to avoiding rumors, innuendo, and gossip at the job.

Prepare to delve in to my tips on how to avoid a workplace scandal. Just follow these simple rules:

This rule should bare no explanation, but you’d be surprised how many people cross the lines by dating someone in the office. Although some workplaces do not have a no fraternization rule in place, dating in the office can bring alongside some issues that can cause uncomfortable situations at work. My rule of thumb is to simply not date anyone in he office, whether there’s a a guideline on the books or not. Things can get sticky, especially when the two of you are at odds, or perhaps, break up. And let’s not talk about the gossip and water cooler fodder dating a coworker, client, or colleague can cause. Just say no to this, please. But if you just feel the need to date inside your work circles, be prepared for what will follow, good or bad.

For optimum Work Life Management, when you leave the office, truly leave it. Sure, there may be work or follow-up that needs to be done outside business hours, but keep it to a minimum. Don’t follow the actions Olivia and her gladiators, allowing work to spill over into your personal. Try to keep communication with your coworkers at a bare minimum when you are “off the clock”. When you begin to blur the lines of work and personal, things can get ugly. So save all of the drama and don’t bring it home with you.

Every office has a Quinn—you know, the person who can’t help herself from going above and beyond, only to mess things up for others. Play your position, not someone else’s, and keep your nose out of other people’s business. This is the best way to conduct yourself at work, for when you are invested in the goings on of everyone else, you tend to be more efficient which leads you to be at the top of your game. Busy bodies, nosey folk, and gossipers can poison a work environment. Just don’t do it. 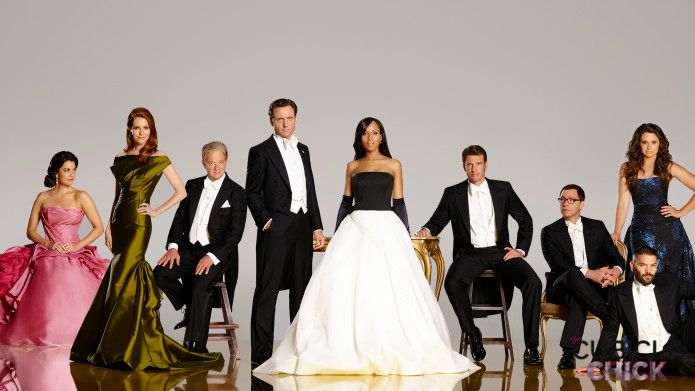 Olivia Pope is an ultimate fixer and she is good at what she does, but her judgment from time to time leads something to be desired. Make sure when you are work, to make judgment calls based on fact and the project or job at hand—not with your feelings. When you operate with feelings and take it to the personal, there is usually not a good outcome.

Rule #5 Don’t Get Too Involved

When you are too invested and too involved with the workplace and your coworkers, you lose focus. You are at work to earn an income and move up the ranks in your field while hopefully, offering a service and helping others. Getting too attached to people’s issues and problems causes you to drop the ball in other areas. Allow yourself a space between you and the people you work for and with.

As a former HR manager, I’ve seen people who have gotten too involved with office politics and personal goings on, and they usually always end up getting fired or blacklisted. Do your job and do it well. Leave the therapy sessions and other items to someone else. You are not your brother’s keeper.

Rule #6 You Aren’t the Exception to the Rule

Oftentimes, people think that they are the exception—to gossip, to office drama, etc. Usually, unless you are a high-ranking employee or the owner of the company, you aren’t above the rules (and even that doesn’t insure you are exempt). Conducting yourself professionally at all times is the name of the game if you want to keep your job, so keep your nose above board.

Don’t allow yourself to be pulled in drama. Don’t cause drama. Don’t entertain drama. Point blank period. Your career will be better for it.

Scandal makes a damn good television series, but doesn’t bode well for the workplace. So while I will be enjoying Season 5 of Scandal, I will also be taking copious notes of what not to do as a professional. Olivia is an awesome fixer, but her actions professionally cause me many a side-eye.

For you fellow Scandal lovers, I’ve got the season premiere trailer below. Will you be watching this season?

Why Taraji P. Henson Cheering For Her Colleagues Is a Lesson For Professional Women
How to Prepare Your Home for Fall and Winter: 6 Must-Do Tasks