I wish I knew how to Photoshop some of my pictures. I would use it for fun and to tweak some of my imperfections. I have the program on my computer but I don’t know the first thing on how to use it. It seems in the world of celebrity, Photoshop is Hollywood’s best friend. The beautiful look more beautiful, the thin look thinner, and there is not a pore in site.

But when does Photoshopping go too far? In the current issue of Essence magazine, I saw Kimora Lee Simmons in a new ad for Baby Phat’s latest perfume fragrance called ‘Dare Me’. I absolutely adore Kimora so I am by no means a hater. She hails from STL which is also my hometown, and she is Cubicle Chick who juggles her family and her empire. But we all know that Kimora doesn’t LOOK like this at all. This ad has been photoshopped to every inch of its life! 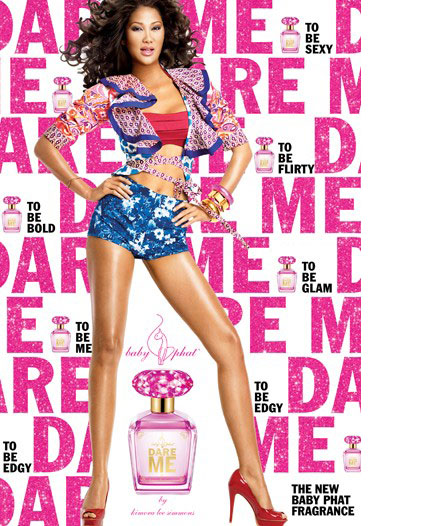 We know that perfection is expected out of Hollywood. But that is not because WE as the public demand perfection. Actually, I would like celebrities to actually humble themselves and be human. I appreciate the toned down just as much as I appreciate the glam!

Here is another photoshop victim, this time Britney Spears, who posed for Candie’s Shoes. Look at the before and after to see for yourself: 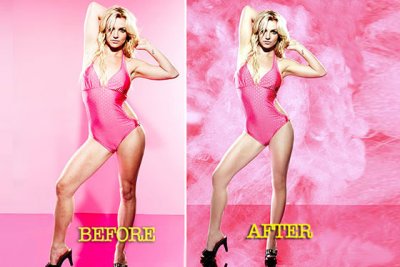 It’s apparent that Britney has been Photoshopped. Not as extensive as Kimora’s above but you can see the difference. Was it even necessary? I think Brit’s pre Photoshop pictures look fab!

How much is too much Photoshop? And what do you feel about its overuse in society?