Each year, millions of pregnant women experience gestational diabetes. As a blogger who has a father with diabetes, I have made it a point of discussing the disease at length on TCC. Educating my readers is a goal of mine, so I thought I would share my story of gestational diabetes from a personal point of view. 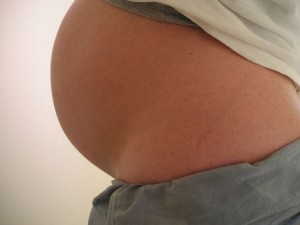 When I became pregnant with my first son, I gained a ton of weight. Around my 24th week of pregnancy, I had a glucose test which indicated a high level of sugar in my blood. I had the test repeated and once again, it showed that my glucose level was higher than normal and there was also sugar in my urine. Afterwards, the doctor diagnosed me with gestational diabetes, and in 1993, the only thing that was prescribed was that I begin administering insulin in my leg. I did this daily.

Because of my diabetic condition, my son weighed more than normal. At 36 weeks, I was given an amniocentesis which showed my son weighed between 11 and 12 pounds. It was decided then that I would be induced into labor so he would not get any larger in my womb. When my son was born, he weighed 9 lbs 14 ounces.

After I gave birth to my son, my finger was pricked immediately to see my blood sugar level. One hour after birth, my blood sugar had returned to normal and did not reach the epic heights I experienced during pregnancy.

Fast forward 10 years when I was pregnant again with my daughter. Massive weight gain again, it was detected pretty early (even before the glucose test) that I had gestational diabetes. This time, I was put on an aggressive diet of 1200 calories a day, no sweets, carbs, etc. I had to write down everything I ate on a daily basis and I was also put on oral medication. Four times a day (when I woke up, after breakfast, after lunch, and after dinner), I had to prick my finger and record my blood sugar numbers for my doctor. Once a week, from about 29 weeks onward, I had to visit my OBGYN and a diabetic specialist to monitor my condition.

It is thought that gestational diabetes is caused by the inability of the pancreas to produce enough insulin in your body while pregnant. Depending on your body makeup, your uterus and the weight of the baby could be causing pressure on the pancreas, therefore preventing it from working properly. Also, the hormones from the placenta could block the insulin from working in your body, thus causing high sugar levels in the blood.

Gestational diabetes is considered a temporary condition while pregnant, but could be a sign that you could develop diabetes later in life. I keep an eye on my sugar every few months to make sure that it is not high and I also try to watch my diet so that I do not expose myself to this possible problem. Because my father also has this disease, I have to be extra careful.