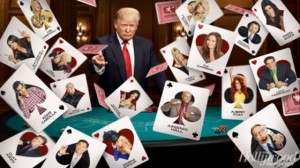 Hate him or love him, The Donald creates interesting television. Last season’s Celebrity Apprentice experienced great ratings, thanks to the antics of a well cast set of contestants. And if this new season is anything like the last, it will be must see TV.

Here is the line-up of contestants:

As you can see, this season’s cast is an interesting one, but I will say that it’s missing some spunk. I notice there aren’t any women of color this season—maybe it was because the Dionne, La Toya, Star, and Ne Ne quartet was a little too much for the show to handle.

While I am not a fan of Donald Trump’s political aspirations (or his Birther stance), Celebrity Apprentice is one of my favorite shows. It is always interesting to see these “stars” in another light as it pertains to business and how they handle themselves in sometimes “pressure” type situations.