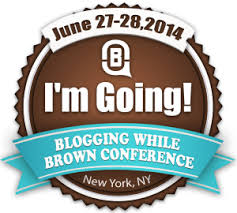 I’ve been hinting at a partnership with AT&T in previous posts and social media updates. And with our partnership, I am able to attend Blogging While Brown in Harlem, NYC, compliments of AT&T. Blogging While Brown always carries a special place in my heart, for it was the first blogging conference I ever attended back in 2010. At that time, I was in the beginning stages of taking my blog from a hobby to my full-time career, and I can say that I was able to do that thanks n part to what I learned at Blogging While Brown that first year I attended.

This will be the third Blogging While Brown experience for me. The first was in 2010 when it was in Washington, D.C. and the second was in 2011 when it was in Los Angeles (I was also a panelist during that event). I am looking forward to seeing old friends and making new contacts and acquaintances. There are so many good sessions on the schedule that it is going to be hard for me to choose!

As a guest of AT&T (who is an official sponsor of Blogging While Brown), I will also have the opportunity to share a new and exciting initiative that AT&T will be announcing during the conference. I am honored to be a part of such a wonderful program, and I am looking forward to telling you guys more about it after it is announced.

In the meantime, you can check my social media feeds for updates and news as I will be liveblogging the conference. I will also be taking plenty of photos too and doing some interviews with attendees and speakers.

You can follow the full rundown for the Blogging While Brown Conference weekend under the #BWBNYC hashtag.

Disclaimer: My Blogging While Brown experience is sponsored in conjunction with a program that I am working on with AT&T, and I have been compensated. The opinions expressed belong to me and aren’t indicative of the sponsor and/or brand(s) mentioned.