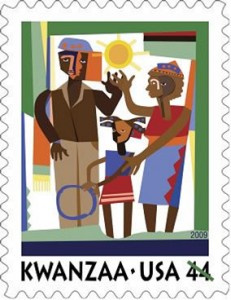 We are currently in the full throngs of the holiday season–with Christmas and New Year taking place within a week of one another, it is indeed the most wonderful time of the year. But there is another holiday that often gets overlooked. Kwanzaa was first created and celebrated 44 years ago (in 1966), but is still a relatively new holiday that seems to fringe on the mainstream holiday fare.

Kwanzaa is a U.S. holiday that honors “universal African American heritage” and is celebrated from December 26th to January 1st. With the lighting of a kinara and the making of gifts to show love and peace, Kwanzaa compasses seven principles of blackness. They include:

Some view Kwanzaa as a militant  type of holiday that is for extremists (because it was created during the Black Power movement), but that is not the case. The essence of the holiday is to show love through creativity by making gifts and sharing with your community. It is not about negativity. However, Kwanzaa has been recognized by the United States Post Office with a commemorative postage stamp that was first introduced in 2004.

According to a study in 2004, 1.6% of those surveyed said they planned to celebrate Kwanzaa. It should be noted that there are some Caucasians and other races participate in the holiday and it also practiced abroad in many countries. To learn more about Kwanzaa, click HERE.

Will you be participating in Kwanzaa this year?