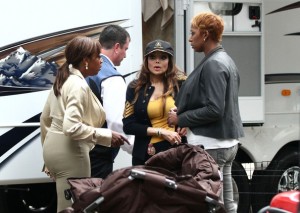 If you are a fan of NBC’s ‘Celebrity Apprentice’, then I am sure you saw what went down between NeNe Leakes and LaToya Jackson after they left the boardroom during Sunday night’s episode. You would think that a victory for Team ASAP under Project Manager LaToya Jackson would mean a celebration in the suite as they watched Team Backbone get rid of another player. But that wasn’t the case— because as soon as reality show star NeNe Leakes got an opportunity, she let everyone know how she felt about Jackson.

I am not about to repeat her venom here—but basically, NeNe (unprofessionally I might add) took it personal and began calling Jackson “Casper” (because of her skin color or lack thereof) and went on to say that the only reason why she was famous was because of LaToya’s last name. She also spoke of LaToya’s age and was just completely dead wrong for her outburst.

For someone who is always talking about separating business from personal, Leakes definitely went there.

I have seen some pretty ignorant and foul stuff on reality television, but NeNe really struck a nerve. It was simply uncalled for. We all know that LaToya isn’t the sharpest knife in the drawer (I also think she is smarter than some give her credit for), but NeNe’s outburst was scathing and undeserved.

After the episode aired, NeNe took to her Twitter account and basically played the “victim” card as she always does. She tweeted about how the editing process makes things look something different from what really happened, but those words were not edited to come out of her mouth like that. She spoke them and now she is crying wolf because she can’t take it back.

NeNe does this all of the time. It’s always someone else’s fault—on Real Housewives of Atlanta, it was Kim’s fault when NeNe went off—I have never seen her take responsibility for her actions.

In every office, there is always a NeNe Leakes. The blamer, the victim, the one everyone is out to get. Only these personality types are usually certifiable and can’t act in a professional manner by not saying everything that comes to their mind at the time. Censorship and professionalism is out the window when they feel attacked—and for these types of employees, they are always the ones who people are after. In their heads, their narcissism prevails.

For people like NeNe, I say sit the hell down. Yes you can have an opinion. Yes, you can be loud and obnoxious. But do it on your own time. In office environment, be professional for once and shut the hell up. You think you are looking like a strong force to be reckoned with but you look like a clown.

No one is laughing with you Boo Boo.

It’s official! My son is 17!
Knowing what you are worth: and charging for it