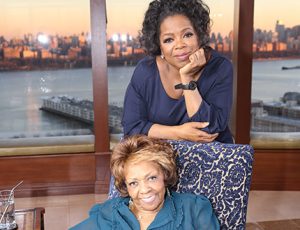 It has almost been a year since Grammy award winning singer Whitney Houston died. I still remember sitting at my computer on the evening of February 11th working on a few projects, when I began to see news on social media about Whitney being dead. I paid it no attention until I received a text from a friend who told me to turn on CNN. And that is when I learned the awful truth.

Many things have been said about Whitney while she was alive and now that she has passed on. But no one knew her better than her mother, Cissy Houston. Cissy has been relatively quiet about speaking on her daughter’s death, only speaking a few times publicly. She was barely shown on the short lived reality show The Houstons: On Our Own, probably because she didn’t want to be involved with that madness.

Cissy sat down with Mother O recently and discussed with her Whitney’s death, her marriage to Bobby Brown, Cissy’s troubled granddaughter Bobbi Kristina, and obviously will plug her upcoming book that chronicles Whitney’s untimely passing. Whitney’s brother Michael also sits down during the interview, and based on the trailer, will make some shocking revelations of his own.

Oprah’s interview with Cissy Houston will air Monday on the OWN Network during Next Chapter, Oprah’s evolved imprint on Monday, January 28th at 10/9 pm CST.

I will certainly be watching. Will you?

Take a peek at the First Look tease below: